Lonna's Fund for Chinook Health
To Donate, see the Membership page
and click on the donations tab

Lonna Coleman passed away from pancreatic cancer at the end of December, 2014. Most didn't know of Lonna’s battle with cancer because that's how Lonna was – a private person, dedicated to all dogs and Chinooks in particular.  Lonna quietly and efficiently worked behind the scenes to promote the Chinook Breed, serving our Club as Publicity Director,  trusted webmaster and innovative Facebook/social media administrator.

Lonna contacted CCA not long after the Club was started about her big, handsome tawny boy Salty, a Chinook-alike from a shelter.  At that time, dogs of unknown pedigree could not compete in performance events unless a breed club signed off that the dog was significantly similar to the breed to be classified as a purebred, neutered or spayed and could only compete in performance trials. Lonna’s Salty was  the first dog CCA certified.  Never was a better decision made by a club! Salty and Lonna were an amazing team, not only winning agility titles, but becoming some of the best ambassadors for the Breed and Club!

When Salty contracted soft tissue sarcoma, Lonna became an activist and chronicled Salty’s struggle, remission, and return to agility.  Lonna continued her terrific work in agility with her young purebred Chinook, Granite Hill Odiorne Point, “Jetty” and she shared some great videos of her boys’ accomplishments. Her favorite events were at Halloween where her innovative costumes were crowd favorites! Lonna was active in many canine events to promote  Chinooks and AKC,  including AKC Meet the Breeds.

To honor Lonna and her positive effect on the Chinook Breed, Chinook Club of America purchased an engraved brick paver from the AKC Canine Health Foundation, earmarked for the Path of Honor at the Purina Event Center at Purina Farms, Gray Summit, Missouri.  ​Funds in her honor will be used for Chinook Health Initiatives.
A Salty Story
October 30, 2010: Salty had a 3rd place performance, in the Halloween Costume Contest at Central Point, Oregon’s AKC Agility Trial, dressed as a lobster in a crab cooker. Lonna was positive that the crab cooker wasn't going to be big enough, but Salty had his own ideas. As soon as he understood that Lonna wanted him to get into
the cooker, he tried a couple different approaches, a huge leap, and slow and methodical (slow and methodical won out).

When it was their turn, at the costume contest, Lonna put the cooker down on the ground and tapped on it for Salty to get in.  She could hear people around her saying, "He's not going to get in, is he"? And, after he put his front feet in she heard, "He can't fit". Then he put in one back leg, the other back leg and finally sat down as Lonna tucked in his tail. It was definitely a tight fit! You can see Salty’s performance on YouTube at http://
www.youtube.com/watch?v=E3CUkVs7B-8 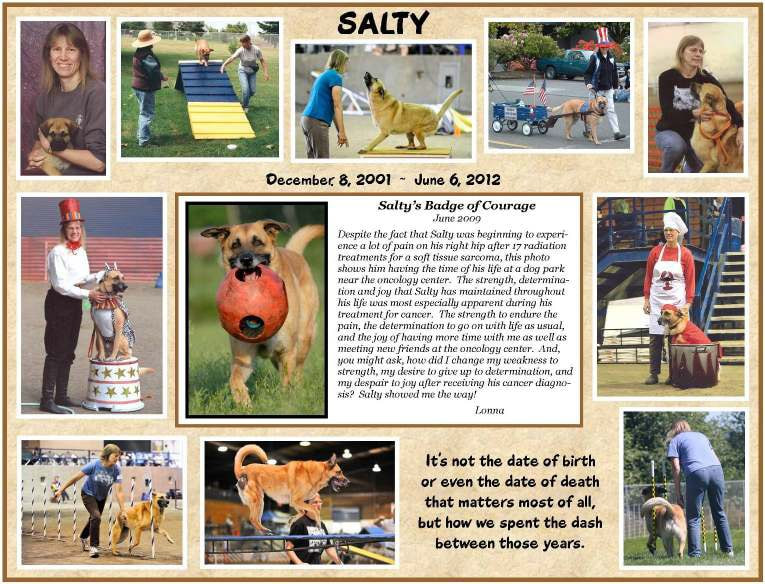