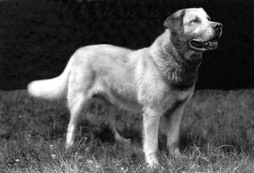 General Appearance: The Chinook was developed in the United States as a sled dog whose unique function was both drafting and sled dog racing. Bred to combine the power of freighting breeds with the speed of the lighter racing sled dogs, the Chinook is an athletic, hard bodied dog showing excellent forward reach and rear extension in a seemingly tireless gait. The Chinook is an impressive dog, with an aquiline muzzle, dark almond eyes, black eye markings, a variety of ear carriages, and a distinctive tawny, close fitting coat. The saber tail is held in a graceful sickle curve. Males appear unquestionably masculine; females have a distinctly feminine look and are judged equally with the male. A dignified and affectionate family dog, Chinooks are known for their love of children. The Chinook is to be presented in a natural condition with no trimming. The following is a description of the ideal Chinook.

Size, Proportion, Substance: The Chinook is a slow maturing breed, often not reaching maturity before 4 to 5 years of age. Size - Ideal height at the withers: males 24 to 27 inches; females 22 to 25 inches.   Proportion - When measuring from point of shoulder to the point of buttocks the Chinook is slightly longer than tall. Females may be somewhat longer in body. Substance - Muscular with moderate bone, a gender difference is easily discernible. The Chinook exemplifies a sound athlete in grace, muscle tone, movement, and carriage.

Head: The head is broad, wedge-shaped, and impressive but in balance with the size of the dog. Cheeks are well-developed and slightly rounded. The expression is intelligent, inquisitive and kind. The eyes are medium in size and almond in shape with black rims that accentuate the eye and give character. The eye can be any shade of brown but dark brown is preferred. Black pigment in an apostrophe shape above the inner corner of each eye is preferred. Disqualification - Any eye color other than brown. The ears are set slightly below the top line of the skull and are expressive. They are medium in size, V-shaped, and slightly rounded at the tip. The ear tip should be just long enough to reach the inside corner of the eye. Any ear type is allowed, including drop, prick, or propeller ears that maintain a fold when at attention.

Matched ears are preferred and for historical reasons, dropped ears are desirable. Mismatched ears are not to be faulted. The topskull  is broad and slightly arched between the ears. When viewed from above, the topskull is almost square, narrowing slightly as it approaches the eyes. The stop is moderate and marked with a central furrow extending up the top skull. The muzzle is aquiline; having a slight dip just before the nose leather, and shorter in length than the top skull, measuring from nose to stop as approximately 2:3 in ratio with stop to occiput. Viewed from the front, the muzzle is tapered to form a blunt wedge. Viewed from the side, the top of the muzzle and the top of the skull are almost parallel.  The nose is large, prominent and the leather is solid black. The lips are black. Bite - The Chinook has a full complement of strong teeth meeting in a scissors or a level bite.

Neck, Topline, Body: The neck is strong, balanced in length, arched, and covered with fur that forms a defined ruff. The skin on the neck is pliable but not pendulous. The neck blends smoothly into the withers. Topline - The back is straight, strong and level, with no sign of weakness. There is a slight arch over the loins. The body is well muscled and hard. The chest is moderately broad, well filled and deep, and neither too broad nor too narrow. The forechest has a prominent prosternum that extends beyond the point of shoulders when viewed from the side. The brisket reaches to or nearly to the elbows. The ribs are well sprung, oval in shape, flattening toward the lower end to allow for elbow clearance and efficient movement. The loins are muscular with a slight arch, having enough length to be athletic. The underline has a moderate tuck-up. The croup is muscular, slightly sloping, broad and without exaggeration. Tail - The saber tail is set just below the level of the topline and is well coated with distinct but moderate fringing. It is broad at the base, tapering to the end and reaches to the hock with a slight curve at the tip when relaxed. When alert or moving, the tail is carried in a graceful sickle curve, neither curling to the side of the body nor touching the back.

Forequarters: The shoulders are moderately laid back, with the shoulder blade and upper arm being equal in length. The forelegs are straight, well-muscled, with moderate, oval bone. When viewed from the front, the legs are parallel, and straight. The elbows turn neither in nor out. The pasterns are flexible, moderate in length, strong, and slightly sloping when viewed from the side. Dewclaws may be removed. The feet are tight, oval in shape, with arched toes, webbing between the toes, and with strong nails. The pads are thick, tough, and darkly pigmented. The front feet may turn slightly outward when standing allowing the dog to push off from the center toes.

Hindquarters: The hindquarters are muscular and strong, moderately angulated, and in balance with the forequarters. The upper and lower thigh muscles are well-defined. The rear pasterns are parallel to each other, and perpendicular to the ground when viewed from any angle. The rear feet point straight ahead. Coat: The Chinook has a thick double coat lying close to the body. The outer coat is straight, strong, and coarse. The length of the outer coat is longer over the ruff, shoulder blades, withers, breeches, and along the underline and the underside of the tail but is never so long as to obscure the clean-cut outline of the dog. The undercoat is short and dense, downy in texture, providing insulation. The groin and inside of the rear legs are protected by coat. A Chinook in full coat feels soft and plush with coarser hair following the topline. A coat in seasonal shedding may be thinner, feel coarser, and should not be penalized. The tail is well-furred with feathering starting about four to five inches from the root. There is slight feathering along the back of the forelegs. The Chinook is shown naturally and trimming is not acceptable. Faults - Excessively short coat, long, rough, or shaggy coat. Trimming of the coat, including whiskers, is to be severely penalized.

Color: Tawny coloration, ranging from honey to a deep reddish-gold, is a distinguishing characteristic of the Chinook and is preferred. Dilute tawny, and its associated diluted pigmentation of muzzle, nose, lips, pads, and eye rims, is acceptable. It is desirable for the ears and muzzle to have darker coloring than the body. This darker ear and muzzle coloring runs from a tawny that is darker than the body to a black shading, with some black shading being the most preferred. A black mark at and just above the inner corner of each eye is desirable. Symmetrical white or cream to pale gold markings are acceptable on the cheeks, throat, chest, breeches, and underside. Any other white markings are undesirable including blazes, socks, and scarves. Disqualification - Any color other than tawny as described.

Gait: The Chinook's gait is smooth, easy, balanced front to rear and seemingly tireless. The back is strong and level when gaiting. When viewed from the side, as speed increases, the head and neck lower, the front feet reach out strongly to a line directly below the nose, the rear drives forward with power, covering ground with minimal effort. When viewed from behind, the rear pads are fully visible. As speed increases, the feet tend to converge toward a center line of gravity.

Temperament: The Chinook is an affectionate and playful family companion with a special devotion toward children. The Chinook is a dignified dog; some Chinooks may be reserved with strangers but should never appear shy or aggressive. They are willing workers who are eager to please and enthusiastic to learn. Chinooks are highly trainable, adaptable, and versatile in their abilities. Gregarious with other dogs, the Chinook works well in teams and within family packs.

Faults: Variations are penalized to the extent of the deviations.

In addition to our CCA approved Breed Mentors, the following participants in the CCA Breeder and Stud Dog Program have offered to make their Chinooks available to AKC judges who are looking for hands on experience with the  Chinook Breed.
Sirius Rising Chinooks - NY

Ten Important Breed Features to Remember about The Chinook

Standard Summary:  From Desirable to DQ

Chinook Standard from A to Z

Chinook Conformation at a Glance

Chinook Head at a Glance

What to Expect when Judging a Chinook

​A Brief History of the Chinook Breed

Click Here to learn about the Pete McMahon Fund
for Judges' Education.