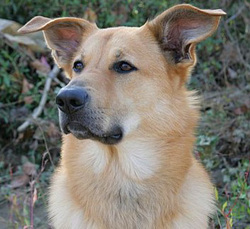 Born September 12, 2007, I have long thought that Linc is not a dog.  He is only half dog.  The other half is a split between a horse and a lion.  That is to say that while Linc has all the qualities you want in a dog, he has the strength of a thoroughbred horse and the heart of a lion.

Linc is remarkably smart.  After bringing him home at eight weeks old, he was housebroken in two days.  He systematically tested the boundaries too, always going farther from the inside of our apartment each time before relieving himself.  Once he learned the boundaries, he was perfect.  He absolutely loves to learn new tricks.  Linc is always alert.  He is also very loyal.  He can go off-leash almost anywhere, never letting me get out of his sight.

As for Linc the quarter-horse, Linc is a very physical dog, yet he never gets hurt.  He joined me on a cross-country drive and loved the great outdoors along the way.  He handled the cross-country flight home like a trooper.  As for Linc the quarter-lion, he is fearless.  That is to say that Linc has never failed to try something new.  It may take him a little bit to gather the courage if it's something he hasn't done before, but he always does.  If we tell him he can do something, he does it.  Naturally curious, he understands his limits while knowing how to push himself.

Something I find remarkable is how Linc instinctively knows to be calm and careful around babies and elderly as though he understands their unique fragility.  Linc's sense of self-consciousness is amazing.  Linc lives in an apartment and is a great apartment dog.  He has had free roam of the apartment from a young age and he does not bark (unless we ask him to).

The thing that Linc loves most, though, is people.  If it's a beautiful day outside but the group is inside, then he wants to be inside.  He is a wonderful family dog.

Linc is not accomplished in the sense that he has not won any awards.  But don't hold that against him-- it is a function of my lifestyle, not his makeup. I think that Linc is a wonderful dog and family member.  He is very healthy.  My love for him is beyond words and I'm very eager for Linc to make his stamp on the dog world.  He is health certified and available for breeding immediately.  Linc and I are willing to travel to the female if necessary to have better odds at breeding success.